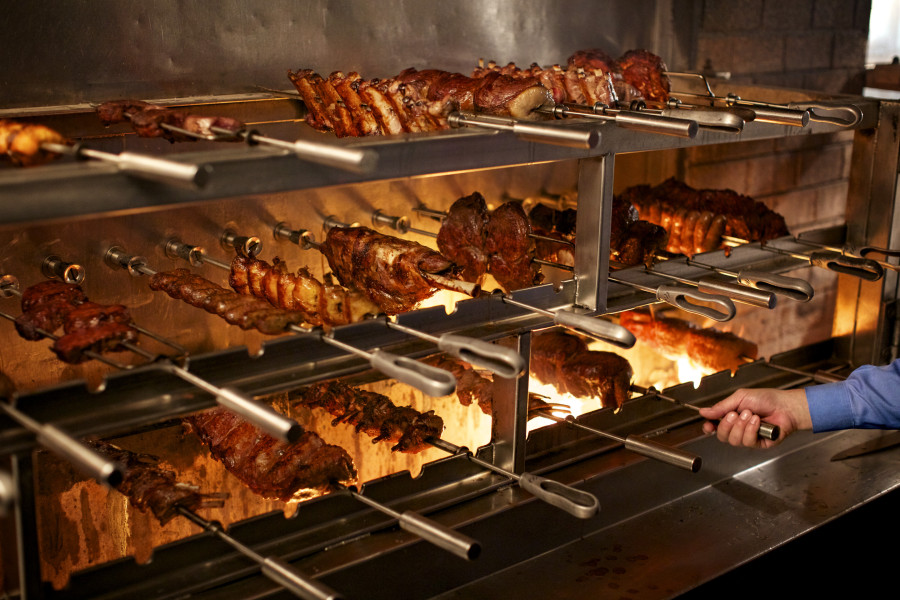 Posted in Brazil, On the Ground, South America

Churrascaria. A hard word to say, a harder word to get your friends to say. A churrascaria is a Brazilian steakhouse and if you keep reading, I’ll share some tips for making an awesome Brazilian steakhouse experience at home. You may know the more popular ones like Fogo de Chao, Texas de Brazil, or Chima, but they all basically serve the same function: to fill you up with as much meat as you’d like until you cry “uncle!”

Here’s how it works: “Gauchos,” the people that serve you via huge skewers, roam the floor with skewers full of various types of meat. In Brazil, this type of service is called rodizio, which means “rotation” in Portuguese. In the US, we call this “getting fat without getting up.” Each diner gets a little coaster with green on one side and red on the other. If you want more meat to be offered to you, keep the green side visible. If you’re done with your meat adventure, turn it to red and the gauchos will leave you alone. The newest Fogo de Chao just opened in Downtown Los Angeles and I went in for lunch to glean the secrets of the gauchos to share with you so you could run your own illegal underground churrascaria at home. After talking to Henrique Hoeppel Huyer, the head gaucho who hails from Porto Alegre, Brazil, I’ve got you covered: “We believe simple is better,” says Huyer, and that’s evident when you look at how all of the meat is seasoned. They don’t go crazy with spice rubs at Fogo de Chao. Instead, they let the beef shine through with a simple seasoning of sea and rock salt. The grill burns high at 1000°F to get a great sear on the outside without overcooking the meat.

Use Only the Best

Fogo uses 100% Black Angus beef and only cuts that they consider to be the best. American favorites like ribeye and filet mignon are offered, but so are Brazilian specialties like fraldinha (flank + skirt combined) and picanha (prime sirloin). “You need naturally tender beef,” says the head gaucho, and that means skipping cheaper cuts like round and chuck for the more marbled parts. Huyer wouldn’t divulge how much meat the Downtown LA goes through a day, but he claims “it’s a lot.” After watching the dining room humming at lunch time, I believe him. Have you ever tried to grill a huge piece of beef at home only to find that the outside is completely overcooked but the inside is too rare? Brazilian steakhouses have the perfect solution: only grill a little bit at a time. If you’re throwing a Brazilian steakhouse party at home, grill the outside portions of your beef to a rare/medium rare, serve it to those that want that temperature, and then go back to the grill to keep cooking to medium, medium well, and beyond. That way everybody gets their beef exactly how they’d like it. Except you. You’re the schmuck who decided to grill all night, so you won’t eat until everyone leaves.

If you’ve ever been to Fogo de Chao, you’ve surely tried the little cheese puffs they serve you at the beginning of the meal. They’re completely addictive and delicious. Even better: they’re gluten free! Think of them as the Brazilian version of French gourgeres. I was able to score Fogo de Chao’s recipe. The measurements are in metric, so convert as needed and the temp is Celsius, which means it’s really 425 degrees instead of 220. Also, you may not live near a Brazilian market (who are we kidding — you definitely don’t live near a Brazilian market), so grab tapioca flour instead of manioc, which is a yucca flour. Enjoy!