Where do you think of when you think about chocolate? Belgium? Switzerland? Hershey, PA? These are all major capitals of chocolate production, but what about the place where the raw materials for chocolate are grown? We’re talking about tropical locations where cacao trees grow big oblong pods that eventually make their way into your mouth as chocolate. The tree-to-bar journey is a long one, but on the Caribbean island of St. Lucia, a whole industry of chocolate making is taking root and, in turn, chocolate tourism is on the rise. Cacao (aka cocoa) has been grown on St. Lucia seemingly forever. Locals have long used cocoa beans to make a rich, bitter hot brewed beverage called cocoa tea (basically coffee using cocoa beans instead of coffee beans) and cocoa sticks (spice-laden tubes of ground cocoa nibs) can be found in every market on the island. Turning those nibs into chocolate, though, has never been much of a local pastime, but that’s all changing. These are the early days of chocolate tourism on the island. In the past decade, various properties have started to recognize the value of their native cocoa crop and they’re turning it into a tourist attraction. The leader in the practice right now is Boucan, a boutique hotel on the Rabot Estate run by UK chocolatiers Hotel Chocolat. Nestled in the middle of Hotel Chocolat’s huge cacao plantation, Boucan offers a tree-to-bar experience where you get an in-depth look at the cocoa growing process and then take cocoa beans grown on the grounds and turn them in actual chocolate. The basic process of making chocolate goes something like this: harvest mature cacao pods from cacao trees, extract the cocoa beans inside the pods and remove the milky white protective liquid, then ferment and dry the cocoa beans. Roast the cocoa beans at a low temperature, remove the cocoa nibs from their dried shells, and then grind them into cocoa powder. Add in cocoa butter and sugar and voila! Chocolate. There are obviously more detailed steps involved, but that’s the general gist. At Boucan, you get to make chocolate the old-fashioned way: by mortar and pestle. By the time you’re done, you not only have your very own chocolate bar to take home, you also have some extra muscles from all that grinding. While Hotel Chocolat doesn’t yet operate a chocolate factory on the island — they actually send the beans back to Europe to be converted into the good stuff — they’re in the process of building a facility right in St. Lucia which will greatly enhance the value of the visit for chocolate tourists.

At the Fond Doux Resort & Plantation in Soufriere, guests looking for a more traditional cocoa experience can see how the beans were processed back in the day with the “cocoa dance.” It’s the way farmers started to ferment the cocoa beans using the liquid from the cocoa pods and instead of explaining it further, I’ll just show you: 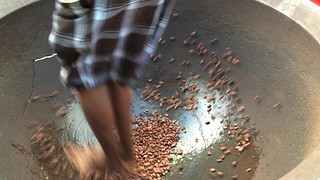 Fond Doux used to be a major supplier for Hershey’s chocolate, but now the behemoth corporation operates their own cocoa farm on the island and Fond Doux focuses mainly on hospitality in their rustically tropical location. Over at Jade Mountain/Anse Chastanet/Emerald Estate, they’re already a step ahead of everyone else. That’s because they’re the only property on the island that’s actually growing their own beans and taking them all the way to full-on chocolate in the same location. Just as single estate vineyards get special recognition in the wine world, the Jade Mountain Chocolate Lab gets special credibility here for controlling the entire process in-house. The cacao is grown on the Organic Farm at Emerald Estate, which is then transported to the Chocolate Lab at nearby Jade Mountain where Dutch chocolatier Wouter Tjeertes transforms it into incredible chocolate creations right there on-site. Guests of the ultra-luxe Jade Mountain not only get to indulge in the chocolate amenities left for them in their rooms, they can also participate in sensory tastings with Wouter and his apprentices to learn about the types of chocolate the experts are making in the lab. “St. Lucia has the best chocolate beans in the world,” says Tjeertes. “My dream for St. Lucia is that within five to ten years, St. Lucia will become the chocolate capital of the world.” Those are lofty goals, but if current demand is any indication, it’s not inconceivable. The demand for Emerald Estate chocolate has been so high that Tjeertes can barely keep up. In fact, at the moment there are only a couple of dozen bars left until production starts again. They produce a super bitter version made with 92% cacao, a 78% version with deep fruity notes of cherries and other red fruits, and a slightly lighter 60% version. In addition to the sensory tasting, guests can also do a full tree-to-bar tour once a week.

Interested in making your own chocolate? Check out these resources: