It’s Pi Day! What’s Pi Day, you say? It’s March 14th, 2015 aka 3.14.15! That’s the value of Pi, which for non-math majors is the ratio of a circle’s circumference to its diameter. Basically, it’s an excuse for me to write about pie since they’re homophones (pi sounds exactly like pie). This is also the first time I got to use the word “homophone” in a post! EVERYBODY CELEBRATE IMMEDIATELY. Yes, those are potato chips.

This is basically a peanut butter cup in pie form. Thick, rich peanut butter sits underneath a blanket of dense chocolate ganache. Underneath is a crust made from Oreos and potato chips. A garnish of potato chips is on top to basically say: “I’ve given up on health!” As I mentioned above, I had it this week. It was AMAZING. I’ve given up on health! 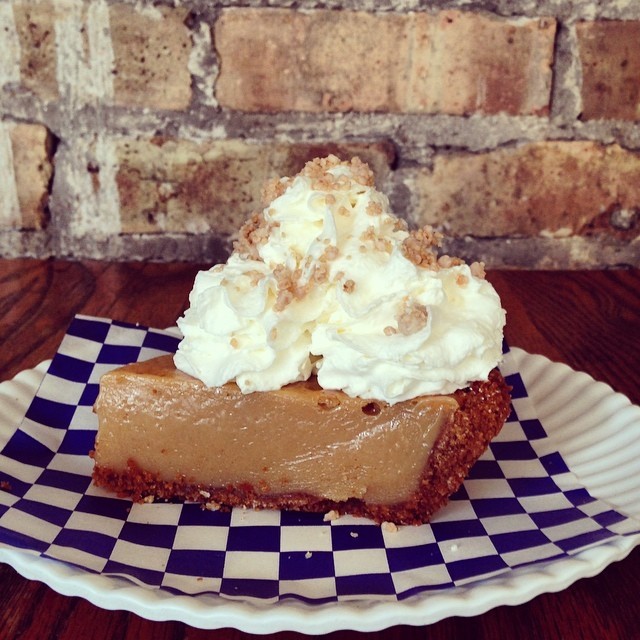 I stumbled upon this humble throwback pie shop in Seattle’s Capitol Hill neighborhood years ago and I still think about it. I had a slice of this unreal peanut butter and chocolate pie and my dreams still include bites of it. They also serve “Pie Fries,” which are basically deep-fried pieces of pie crust and for that, they should win a Nobel Peace Prize. Sorry for the awful quality. I had to crop out Miss Myra’s amazing barbeque.

Miss Myra’s is a little BBQ restaurant in Vestavia Hills, AL, just outside of Birmingham. It feels like it’s been there forever and that’s because it has. While barbeque fans can indulge in Birmingham’s famous white barbeque sauce (especially good with Miss Myra’s smoked chicken), I get down with the Peanut Butter Pie. It’s a simple cream pie with a perfect graham crackery crust. I would sleep on this stuff as a pillow if it wouldn’t get in the way of my nightly hair-curling ritual. It’s in-store only, but with seven locations throughout Michigan it’s easy to find a store near you (assuming you, um, live in Michigan). They describe their Chocolate Peanut Butter Pie as “Chocolate and peanut butter pastry cream swirled into the perfect combination of flavor, topped with whipped cream and our handmade peanut butter cups- all natural peanut butter and dark, Guittard chocolate.” I describe it as “Awesome.”

Also, if you liked this post, please considering sharing it with everyone you know!