Posted in Cathay Pacific, Hong Kong, In the Air, International

On my return flight from Hong Kong (HKG) to Los Angeles (LAX), Cathay Pacific provided me with a seat in Business Class. That was mighty kind of you, Cathay, and the seat was much appreciated. While other blogs may cover the seats (fully lie-flat!) or the entertainment options (plenty of great movies!), we here at Fly&Dine are focused on one thing and one thing only: the food. I had a decent experience in Cathay’s Premium Economy, but ended up somewhat disappointed with the beef tenderloin. I vowed not to make the same mistake again on the return flight.

When the menus were distributed, I almost got sucked in again. The grilled Australian prime beef tenderloin with Madeira wine sauce, portobello mushrooms, roasted purple sweet potato, pumpkin, and French beans certainly sounded good. My resolve was strong, though, so I narrowed my choice down to the decidedly Asian option of steamed cod with preserved mustard greens and Chinese olive with steamed jasmine rice and bok choy or the vegan-friendly carrot and coriander (that’s cilantro to us Yanks) agnolotti with roasted vegetables in a carrot and coriander sauce. I honestly didn’t even consider the lamb korma with saffron basmati rice and mushroom curry because that’s not even a dish I would order on the ground.

After much deliberation and a consultation with two different flight attendants, I opted for the cod. Did it beat the beef on the outbound journey? You bet your bok choy it did. We’ll come back to the cod. First, we need to discuss the appetizers.

Those cashews you see at the top of this post? They came first. Unlike other airlines I’ve flown recently in Business (*cough* American Airlines *cough*), these nuts were cold. That’s negative points right there, but at the end of the day, they were still cashews and that meant they were still pretty good. Cashews are the Audi of the nut world: high quality and functional without being too flashy. 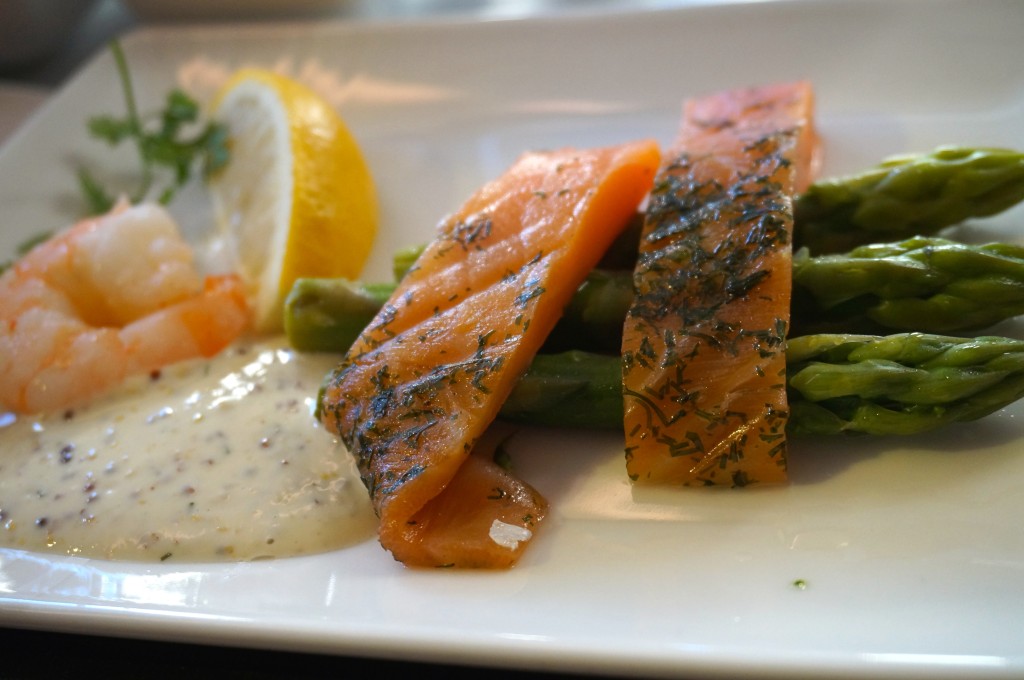 Smoked salmon with shrimp, asparagus, and a mustard-mayo combo sauce.

The main starter was a smoked salmon and shrimp dish with asparagus and fancy French mustard-mayo. Also cold, this dish was a mini trip to Provence with thick-cut salmon, tons of dill, and nice tang from the Pommery mustard mixed into the mayo. The asparagus was either poached or blanched and the little shrimp wasn’t bad, either. All in all, a great light bite to start the dinner. If they wanted to serve a larger portion as a dinner option, I’d seriously consider ordering it.

Now for the main course: that cod was a major surprise. I thought I’d merely tolerate it, but I ended up eating every bite. Tender and surprisingly moist, this dish was light on bold flavors but heavy on satisfaction. After adding the little packet of Guilin-style hot sauce that I coerced out of the flight attendant (when I say coerced, I mean I asked nicely), it got even better. The initial serving was way over-sauced, but after adding a scoop of rice, it all balanced out. The bok choy was especially good, although the preserved mustard greens and Chinese olives were barely noticeable. In contrast to the beef from the first flight, cod is a perfect choice for airplane meals. It doesn’t lose its moisture when cooked in the sky and takes on flavors really well. Viva la AirCod.

For dessert, they served your choice of fruit and/or cheese as well as a peanut butter tart with mixed berry compote. The cheese options were Cambozola, Double Glouster, and Chaumes with a fantastic cube of cabernet paste to offset the richness of the cheese. The peanut butter tart was less successful than the rest of the meal. It had the texture of a light cheesecake, but was too peanut-buttery one note for me. Add some chocolate in there and we would have been in business, which is ironic, because I was in Business.

Breakfast wasn’t too exciting. They gave a choice of fish congee, dim sum, or an omelette with sausage, bacon, bubble & squeak, tomatoes, and mushrooms. Not bad, but nothing to write too much about. Here’s a photo: Is that an omelette? Yes it is.

The good news is, I also got this nice picture of fruit: Overall, I enjoyed the Business Class food better than Premium Economy, but that might be due to better ordering on my return flight to LA. In any case, Cathay has vaulted towards the top of my Airline Food Power Rankings.

What’s been your experience with Cathay Pacific’s in-flight meals? Good? Bad? Indifferent? I want to hear about it.